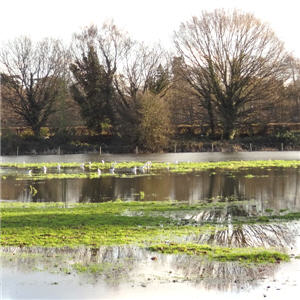 Land at Greenlands Farm has been offered for sale as a ‘strategic development opportunity’, despite being Green Belt, working floodplain, a potential mineral zone, and an important element of Thames riverside landscape.

This is part of the remaining farmland which separates Weybridge from Walton — a significant piece of local countryside, with traditional hedgerows and field pattern. The farmland helps define the local landscape, and is included in the Strategic View from historic Oatlands Park, and the Thames Landscape Strategy.

This farmland also serves an essential function as a working floodplain. The underlying gravel,  linked to the Thames by underground aquifers,  helps absorb floodwater , which rises in the fields when the Thames is flowing high, as the attached picture shows.

PP&DRA first raised local concerns about development ambitions for this land back in 2005, on the front page of our newsletter.

As Green Belt with exceptional landscape value, and working floodplain, this land should be safe from development. There would be an outcry in the local community if serious plans for developing this land were ever to be put forward.

Speeding traffic has been an issue for many years in Portmore Park, and it remains an issue.  Is it time for residents to act again?

Traffic calming was introduced after pressure from local residents and from this Association. It helped slow traffic  (there were some serious injury accidents here in the 1990’s, but not since).  It was followed eventually by a 20mph limit in the Portmore Park Road / Thames Street area.

But too much traffic still speeds through Portmore Park.  The signage is poor, with little to tell drivers they are entering a 20 zone. We want 20 zone signage painted on the road surface, where drivers will see it.  And a speed-sensitive sign or two would be even better. We have made this clear to our County Councillor.

Is more evidence needed, to get things acted upon?  Surrey County Council looks first at the hard evidence of the number of road casualties.  PP&DRA wants to get something done to prevent further road casualties.  Better signage is not that expensive.  Surrey recently repainted the ‘SLOW’ wording on the road surface, when they could have painted a much more effective ‘20 ZONE‘ road marking for much the same money.

In Greater London, introduction of well signed 20 Zones has seen a 40% reduction in road accident injuries to children.  Can Surrey County Council  learn from this?

PP&DRA would also like to see the North Weybridge 20 Zone extended.  For some reason it stops east of Thames Street, so there is currently no 20 limit around St James’s Junior School, in Monument Road and Grotto Road.  Surrey CC has said this is because 20 limits must be self-enforcing, yet Monument Road Road has traffic calming with very steep speed humps.

Can we get something achieved on any of these issues?  What is the best way forward? We have have been thinking about doing community speed checks,  with radar gun to gather evidence, and with bright yellow jackets to make rat run traffic aware.  Worth doing? 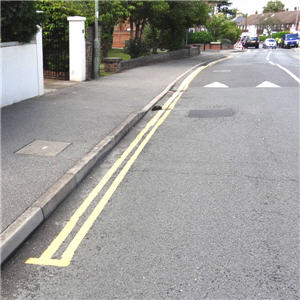 Double yellow lines are appearing in places where they may not be needed: notably on Thames Street opposite St George’s Junior School.  Many residents feel that single yellows with no waiting at school drop-off times are all that’s required here.

PP&DRA has long campaigned to have double yellow lines on dangerous corners, where they are essential to give safe visibility — especially around the junction of Grotto Road with Thames Street.

But with such limited local space for on-street parking, north Weybridge  cannot afford to have ‘no parking at any time’ on long stretches of road, away from junctions, in places where where parking is not a safety issue.

We gather that further double yellow lines, away from junctions and with no apparent justification on grounds of safety,  may be appearing in the coming year. We have urged our County Councillor to try to reverse this at the next review, and ensure that in future double yellow lines are used only in places where there is a strong safety case.

Millions of tons of gravel and aggregate sit below our local Green Belt, and Surrey County Council have parts of north Weybridge earmaked as Potential Mineral Zones, labelled PMZ22 and PMZ23.

Quite rightly, these sites have been rejected at successive reviews of which PMZs to excavate, for access and landscape reasons. But Surrey has to  meet targets for gravel extraction, and has regular PMZ reviews, so residents of Weybridge are wise to be vigilant in safeguarding our local landscape.

When we reported on this topic eight years ago, Surrey’s latest PMZ review said access for HGVs getting onto Walton Bridge was one of two major issues preventing gravel extraction in PMZ23. Would it be sceptical to wonder at Surrey’s motives for proposing a huge cloverleaf junction with Walton Lane in their replacement Walton Bridge plans at the time (very handy for gravel lorries)?

Happily, after pressure from local groups, prominently PP&DRA, a Public Inquiry roundly rejected Surrey’s plans for covering the riverside with a big junction, and demanded that the riverside amenities at Cowey Sale be retained and enhanced. The resulting redesigned smaller new bridge and excellent riveside amenities are things the whole community can be proud of — great work by the bridge team.

Surrey’s subsequent 2009 PMZ review said the new bridge (with its improved T-juntion) would make bridge access from PMZ23 easier, but the increased significance of the riverside amenity now made thousands of gravel lorry journeys along the riverside Walton Lane at Cowey Sale an unacceptable issue.  So access for gravel removal could only be possible via the river.

The other — highly important — reason for rejection is the landscape value of the current Green Belt.  Surrey recognise that there would be a medium term significant adverse effect on local landscape character and the setting of Weybridge.

One matter of some concern is how up-to-date the information which Surrey use in their reviews is. The 2009 update made no mention that the land earmarked for PMZ23 is designated a Strategic View from historic Oatland Park.  No mention that there is a Health Club and Riding School on the land potentially to be dug up (SCC only recognise one dwelling).  No mention that part of PMZ23 is Exchange Land, given over to public use as part of the Walton Bridge post-Public Inquiry planning consent. 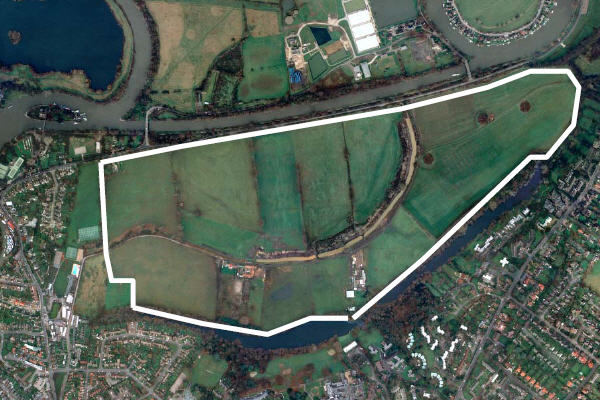