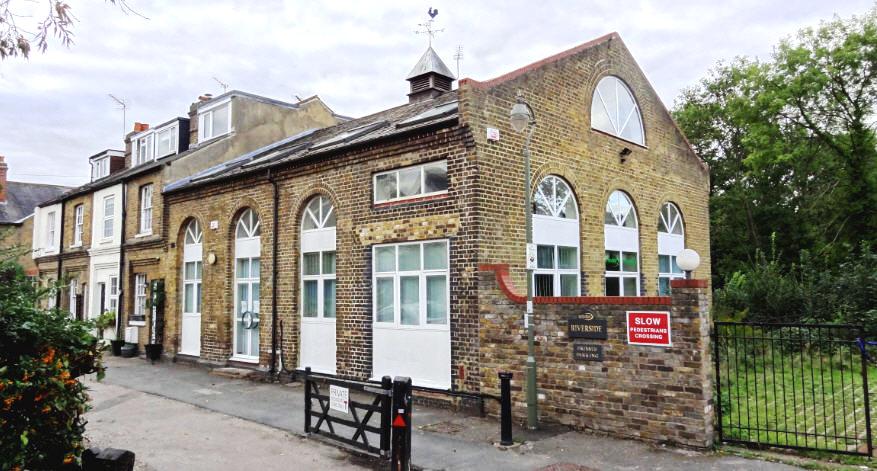 A local landmark building in Church Walk, with a significant history as the first generating station for electric street lighting in England, is at risk.

Its fanlight windows with elegant arched brickwork on three aspects are key visual features in the local street scene, as are its traditional proportions, and its courtyard with an open view to the River Wey.

All these would be lost if the proposed new design as set out in planning application 2015/3135 were to be permitted– a two storey building with square windows, higher roof with large dormers, a blank gable end, and a huge single storey side extention and garage.

This historic street scene is too significant to lose.

Below is a photograph from 1989, when the original Weybridge Electric Light nameplate was still in place (photo courtesy of Di Balding). 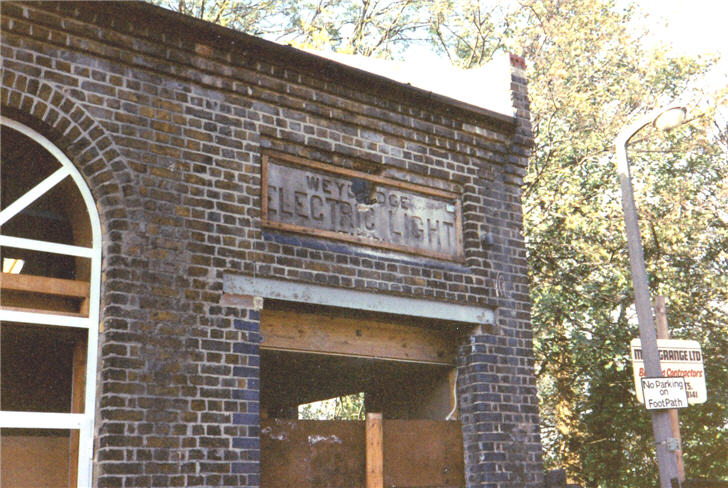 UPDATE 3 October :   Current application withdrawn. We await future proposals, which we hope willl be more sympathetic to the history and setting, given the number of strong and well argued objections lodged against 2015/3135.

Here is what PPDRA had to say about the application:

This application proposes to change beyond recognition a landmark building in Weybridge, a building with a significant history as the generating station for the first electric street lighting.

We object to the proposed development on the following grounds:

Visually this historic building is characterised by its fanlight windows with elegant arched brickwork on three aspects. Allowing the replacement of those features as proposed, with the visual mass of the additional height and dormer windows, would have a very negative impact on the street scene of this picturesque backwater.

The proposed single storey side extension and attached double garage would add considerable further visual mass (as would the proposed blank second floor wall on the north-eastern aspect, replacing what are currently attractive fanlights).

This would intrude strongly on the street scene in Church Walk, where currently the view approaching from the north is of the historic fanlights seen across a courtyard. It would intrude on the view from the east, especially as seen when approaching Church Walk along Beales Lane, from which the present the view is of courtyard and riverside trees beyond.

The proposed radical transformation of the aspect facing the River Wey would have a significantly damaging impact on the view from the Grade 2 Listed bridge over the Wey.

The removal of 5 metres of existing wall along the Church Walk footpath would expose the view of the proposed new bin area, directly in front of Portmore Cottages. We note that the front elevation shown in the application does not extend to this significant part of the proposal.

The proposal design would more than double the footprint of a building in a Class 3 Flood Zone, which was threatened by flood as recently as last year.

The proposal is to divide the current site of Riverside Studios 1 & 2 plus outbuilding Studio 3 in a new way, reducing the land attached to studios 2 & 3 (while leaving the portion of the site with the outbuilding Studio 3 undeveloped for now), and to more than double the footprint of the Studio 1 & 2 buildings in the truncated site to create two much larger dwellings. The impact on density would be dramatic and entirely unsuitable for this sensitive site.

The proposal is to remove all onsite parking in the application site, and simply to offer a garage attached to one of the proposed dwellings. No parking space is proposed for the other dwelling. This is unacceptable for this non town centre site, given the severe lack of parking space in the privately owned stretch of Church Walk in front of Studios 1 & 2.

The proposed removal of 5 metres of existing wall along the Church Walk footpath appears to be proposing vehicular access across what has always been solely a footpath (SCC FP18) at this point, relocating the access to Studios 1 & 2 and presumably allowing for future access to the Riverside Studio 3 site – whose current access would be obstructed by the proposed double garage – along and across FP18.

6. Amenity and safety of footpath users

The garage and bin access design do not appear to take into account the amenity and safety of users of the footpath (FP18).

Overall, the design proposed in 2015/3135 would have a significantly negative impact on an area which is prized for its charming street scene and history. Hence we urge refusal of this application.

Historic note: Here is a piece on the history of the building, from the Parish Magazine, 1989